Providing for Life-changing Experiences at Lawrence — Bequest and IRA Rollover 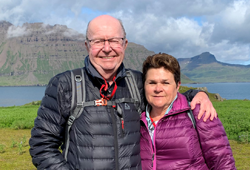 Nine years ago my husband, Jim, came with me to our 40th reunion. I was able to introduce him to many of my friends and to several of my favorite professors, including my favorite anthropology professor and advisor, Ron Mason and his wife, Carol, both of whom had been my mentors at Lawrence. After a couple of days on campus, and after having dinner with Ron and Carol, Jim and I agreed that we needed to do something special for Lawrence. I decided to do this by giving a gift now, and joining Lawrence-Downer Legacy Circle with a future gift to ensure my legacy at Lawrence.

When I started thinking about what I wanted to do, I knew it would have something to do with my major, anthropology. Not only had I loved my anthropology course work, and been able to apply it throughout my career in fields that one would think had nothing to do with anthropology, but I'd had a life-changing experience the summer after my junior year, working on a dig on Rock Island off the Door County Peninsula with Ron and Carol Mason. On that dig the crew of students learned to work under physically taxing conditions, and have fun doing it. We learned to see the significance of things that we found, that most people would never even see. And perhaps most important for me, I saw Ron and Carol working as equal partners, pursuing their intellectual and professional goals all while good naturedly supervising a bunch of rowdy young adults, and parenting their two young children. They became role models for me. Though my career took me away from anthropology and archaeology, I never forgot the many lessons I learned from Ron and Carol, and from the enriching experience of the Rock Island Dig.

Having put two children through college, I now realize that those important and life-changing off-campus experiences are not without cost. Students can't do an unpaid summer if they have to work during the summer to help pay for their education, and many families simply don't have the funds to pay for their children to live away from home during school breaks. I wanted to make it easier for students to have those experiences. So working with Lawrence staff, I started a fund to support Lawrence anthropology students pursuing off-campus programs. To honor the Masons and their long commitment to Lawrence and their students, we called it the Ronald J. and Carol I. Mason Fund for Excellence in Anthropology or the "Mason Fund."

While I had committed to endow the fund in a bequest to Lawrence, I had no intention of fulfilling that bequest anytime soon, yet I wanted the fund to be available immediately to support students. Several alumni joined me in fundraising and making annual gifts to the fund, and a few very generous alumni made larger one-time gifts. In the first few years, we raised close to $50,000 and the anthropology faculty started to make grants. Then last year an alumna made a large and unexpected gift to Lawrence that was earmarked for the benefit of anthropology students. When that gift was added to the Mason Fund it was suddenly well over the $100,000 threshold that was needed to make it into a self-sustaining, endowed fund. Now we are assured that the Mason Fund will exist in perpetuity, and that it will always be available to support students. It's amazing how a relatively simple idea can turn into a significant gift that will help make and keep Lawrence the world-class institution that it is.

Also, when I turned 70 ½ last year, I began to make my annual gifts to Lawrence out of my IRA. Now my gifts to Lawrence are 100% tax free. This seemed like a win-win for Lawrence and for me. I could contribute more to Lawrence while reducing my tax liability on my withdrawals from my IRA. Now I just direct my financial institution to make a direct payment to Lawrence, rather than writing a check or making a credit card payment myself. It couldn't be easier.